The Tuareg are an ancient Saharan people described as far back as Herodotus, that presently number up to 1.5 million tribal people. For over 2000 years this semi nomadic and pastoralist people has operated the trans-Saharan caravan trade, basing their economy on breeding livestock and trade. As well as Mali, they inhabit the Sub-Saharan nations of Niger, Algeria, Burkina Faso, and the southernmost tip of Libya. Their spoken language is Tamasheq, a language which has its roots in North Africa, and their writing system uses an ancient hieroglyphic script called Tifinagh, with Berber origins. The predominant religion is Muslim.

The Blue People of the Sahara

The Tuareg are also known as the 'Blue People' from the custom of veiling their faces with indigo dyed cloth: The Tagelmust, worn by Tuareg men, gives the appearance of both a veil and a turban, which traditionally was worn on reaching maturity to ward off evil spirits, as well as having the practical effect of offering protection against the fierce Saharan sun and sand.

The mid twentieth century saw great changes to the Tuareg way of life, with the end of French colonial rule in Western Africa and the establishment of new countries with new boundaries and borders. Devastating droughts in the seventies decimated livestock herds, alongside political disruption and ensuing economic constraints. While many have managed to maintain their nomadic tribal existence, a proportion has been forced to settle in towns and villages to seek out new forms of income. Despite being minorities within larger national groups, their tribal heritage and culture has a much wider influence, and the main conduit for this is via the activities of the artisans within the Tuareg communities.

Tuareg tribal art focuses on jewellery, leatherwork, metal saddle ornaments, and richly crafted swords. It is a repository of Tuareg heritage and culture, passed down through the female line, and results in exquisite silver jewellery and leather artefacts. Down the generations, Tuareg artisans have preserved the symbolism and cosmology of their environment and have incorporated it into their jewellery. The geometric patterns and designs are integrated into the pieces in a way that results in jewellery that speaks universally from the particular, and has a uniquely aesthetic appeal.

The Tuareg Cross is one such piece. The term 'cross' has been applied by Europeans in an attempt to describe this piece of jewellery, and has no equivalent in the Tamasheq language. Tribal Tuaregs refer to it as Teneghelt from the verb 'enghel' which means to pour, and refers to the 'lost wax' method by which the piece is created. The circle and the cross within the piece combine male and female symbols in union, to create a concrete object of great beauty, and is made of silver, regarded as a noble metal. This heritage is based on an ancient love myth, but it is also given by father to son, at puberty, as a symbolic reminder of the Tuareg nomadic life style, and to help him find his way at times of confusion, distress or difficulty, throughout the four directions of the world.

The role of the artisans

The Tuareg artisans who create such articles, and many, many more, follow a long tradition that defines their function and social status within the community. They hold a unique position within their society, in which they have unusual independence. Not only are they capable of producing objects of great symbolism and beauty, but they hold the oral history and the tribal heritage of their community which they then translate into physical objects. Thus they hold the tradition and culture of their people in a particular and unique way. The pieces themselves become the repository of this rich tribal heritage, as well as representing the concrete wealth and status of the individual who owns it. Each object therefore moves between the individual and the collective and back again, down the ages.

If you want to support our fair trade initiative with the Tuaregs you can make an ethical choice to buy from our fair trade selection of jewellery, or indeed to make a donation towards one of our projects.

Click here to return to the top of the Tuareg Heritage and Culture page. 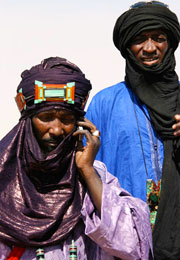 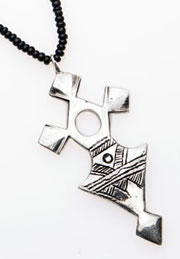 The famous Tuareg Cross, gifted to a son on reaching puberty 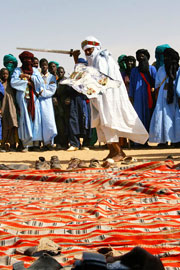 Tuareg man dancing in traditional ceremony; swords are passed down the male line and are extremely valuable 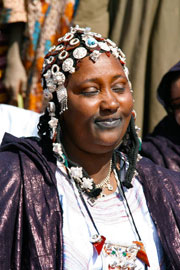